A visit on board the Russian Frigate Shtandart 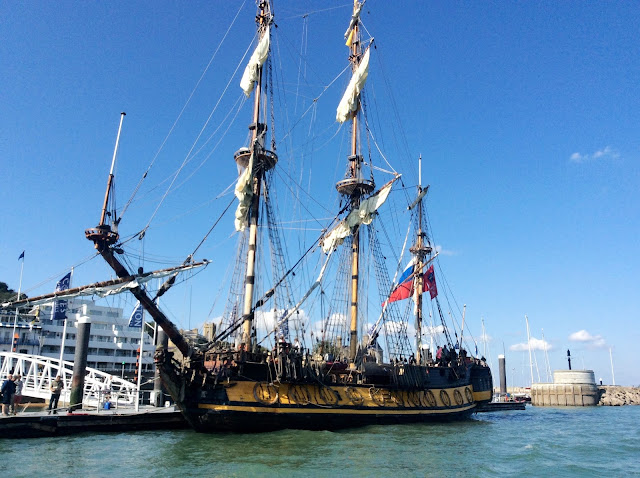 The other weekend we were down in Cowes for a long weekend to watch the Cowes Torquay Cowes powerboat race. We were all having dinner on Friday night in the Island Sailing Club when there was a bit of a commotion on the balcony as people were trying to get a photograph of something coming into Cowes Roads. It couldn't just be a powerboat arriving so I sent Guy off to have a look. 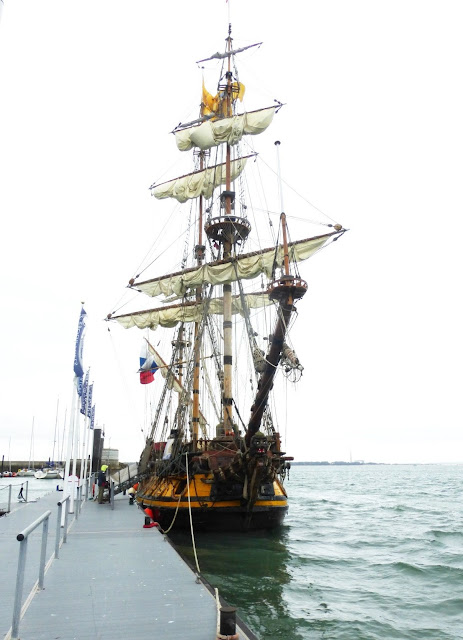 "It's a big Square rigger coming into the Jubilee landing stage" he said. Now you see quite a few square riggers in the Solent but they all tend to be sail training ships which usually have a nineteen twenties configuration with large deck houses etc. 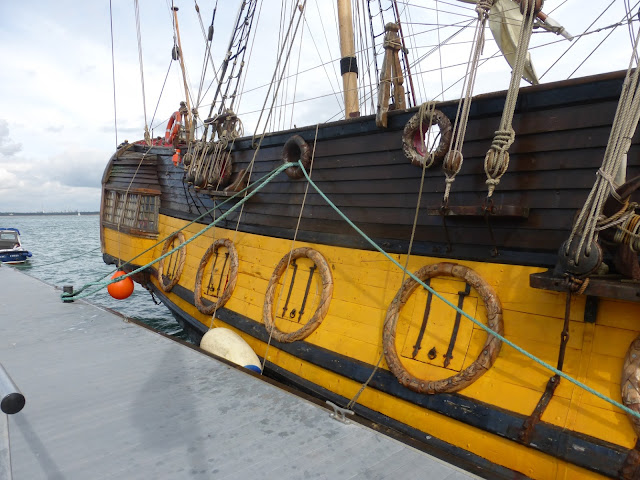 This was different, however, as it looked exactly like an eighteenth century ship.  "A pirate ship! as the Old Bat declared. Looking at it more closely I saw that it had a large yellow band along the hull and distinctive circular decorated gun ports. It looked just like the sailing ship that had appeared in the film The Sovereign's Servant which I reviewed on these pages some years ago. 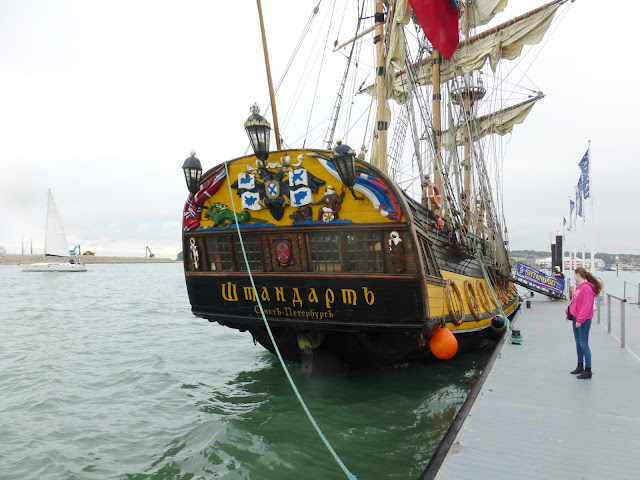 When we went down to look at it the next morning I saw that it was flying a Russian flag and, having spoken to one of the crew, found out that it was, indeed, the vessel that had appeared briefly in the Russian film about the Great Northern War. We got to explore what turned out to be the frigate Shtandart, a replica of Peter the Great's first flagship of the Russian Imperial Fleet which was launched in 1703. 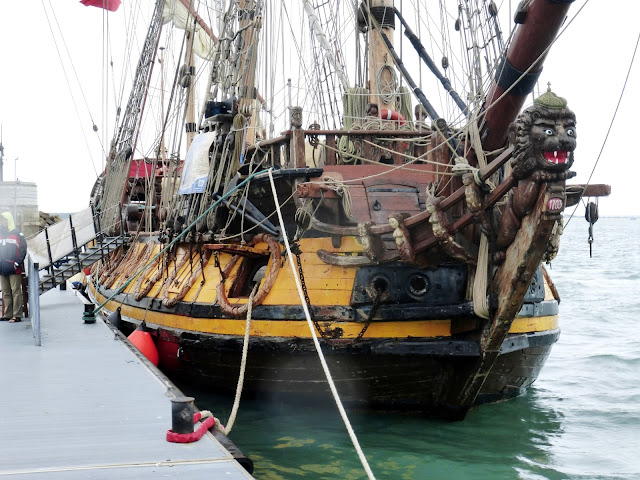 It looked like a pirate ship because it was from bang in the middle of the Golden Age of piracy (although the effect was increased by the fact that they were playing the soundtrack to Pirates of the Caribbean on board). The ship was designed to be the first of a fleet which would wrest control of the Baltic from the Swedish Navy.  This shot demonstrates why I am unhappy with most model pirate ships for wargaming and, especially, most of the scratch built ones you see, which have slab sides.  Look at the inward sloping curve on the hull; that's what a pirate ship needs to look like! 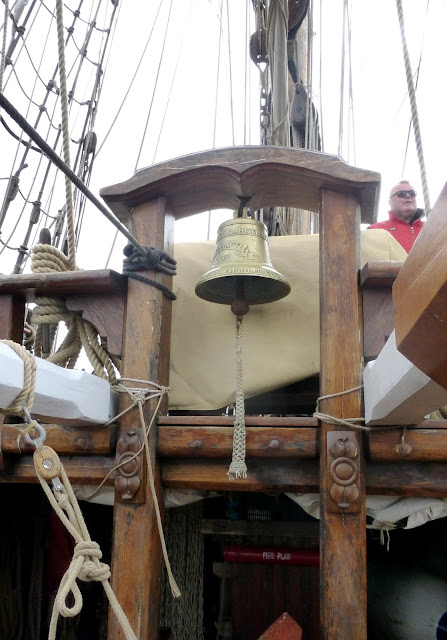 The replica took six tears to build and was launched in St Petersburg (as was the original) in 1998 and had been built from larch, with an oak keel and frames, from forests planted in 1730 specifically designed to be used as ship lumber.  All the wood for the vessel came from forests around St Petersburg. 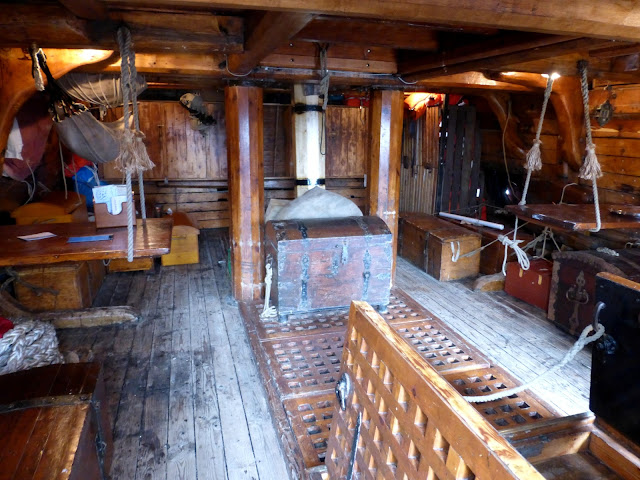 The permanent crew is six to ten people with twenty five to thirty trainees.  The original ship had a crew of 120.  In the main cabin they now have up to 20 people sleeping in hammocks which must be very cosy, as there was not a lot of space. 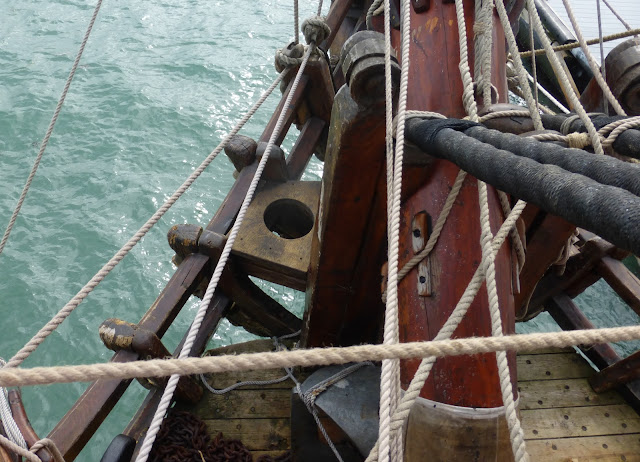 Not a lot of privacy either; we met several young Russian ladies who were part of the crew coming back from a shopping trip from the new Marks & Spencer food shop in Cowes (at last!).  We were told by the Russians that although the lower deck has modern facilities, on several occasions the toilets had failed and they actually had to use the traditional 'head' at the bow (above).  Scary! 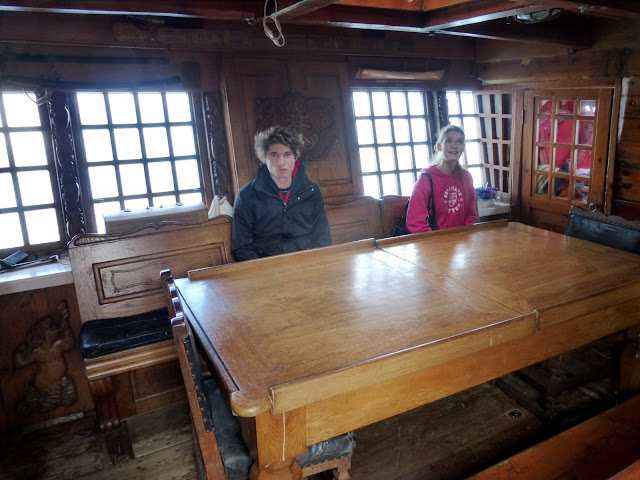 Guy and Charlotte at the captain's table

The Captain's stern cabin was on the cozy side too and it made me realise, when watching Black Sails last night, how ludicrously oversized the ship's cabin sets are in that. 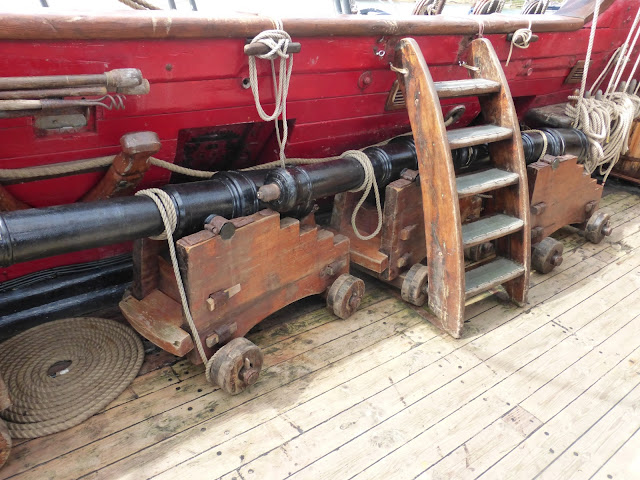 The cannons on deck (the original carries twenty-four) were all made of iron and not plastic as you usually see these days. 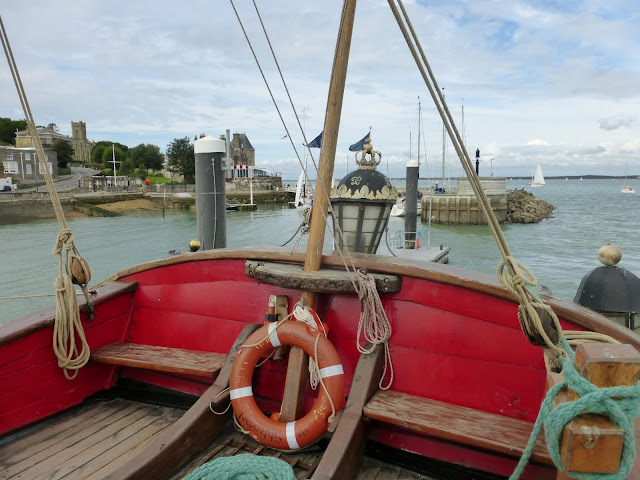 Looking over the stern towards the RYS

They all were capable of firing too, we were told by the crew.  Indeed, when they had sailed into port the night before, they had fired a cannon in salute as they passed the Royal Yacht Squadron.  Quick as a flash the RYS fired one of their cannon in salute back. 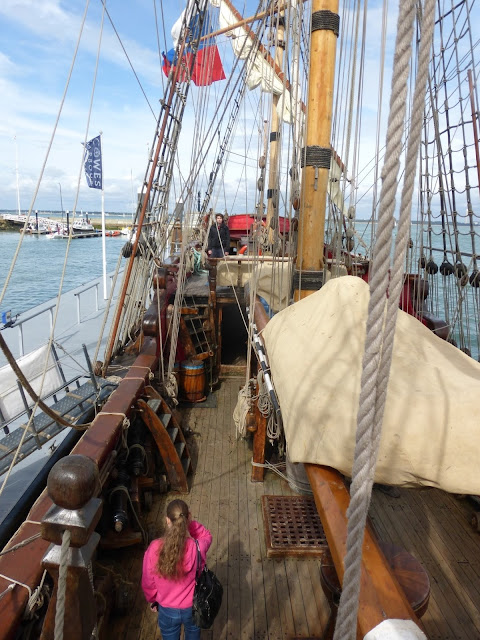 Compared with ships from the period you see portrayed on TV and in films the amount of deck space was very small, even with the cannon tucked away under the gunwales. 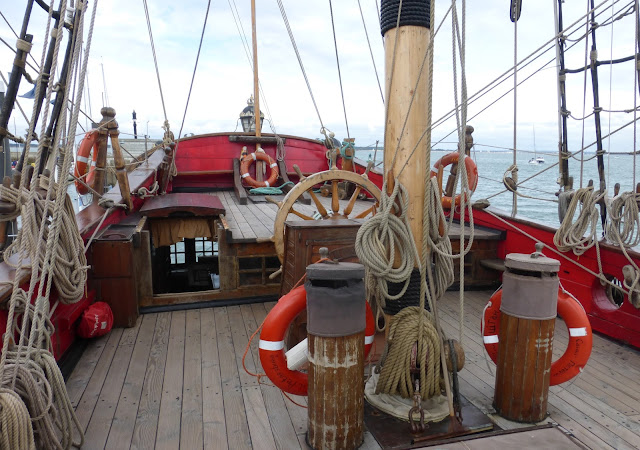 The ship is 113 feet overall with just a 23 feet beam and a 100 foot tall mainmast.  Everything is very cramped and it is the first time I have got a real feeling for what it must have been like to serve on a frigate in the age of sail.  Standing on the deck of HMS Victory or USS Constitution (which is over twice the length and twice the beam) does not really do this! 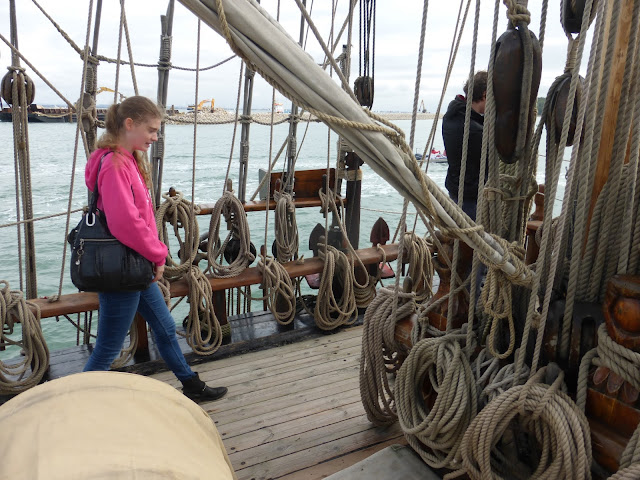 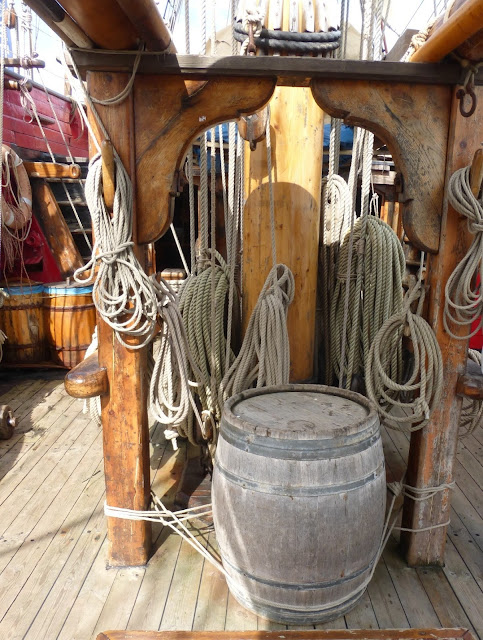 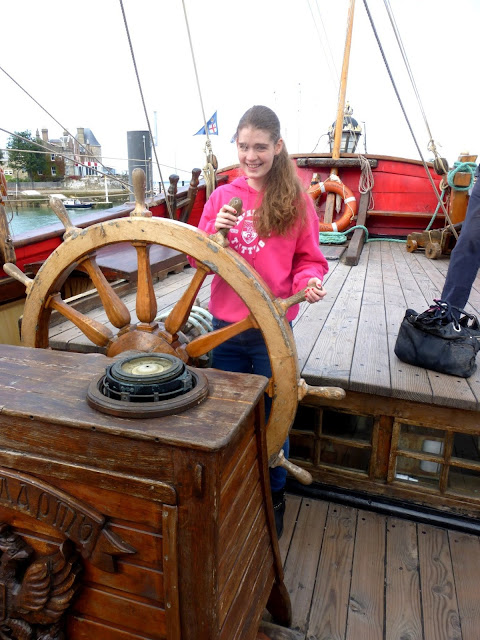 Charlotte has always wanted to be a pirate and I think this was the closest that she will ever come.  Even the Old Bat found it fascinating but, having crossed the Gulf of Finland in a small boat in a force seven, I wouldn't fancy going too far on the Shtandart in rough weather, let alone going aloft to get the sails in and out as the Russian girls said they did. 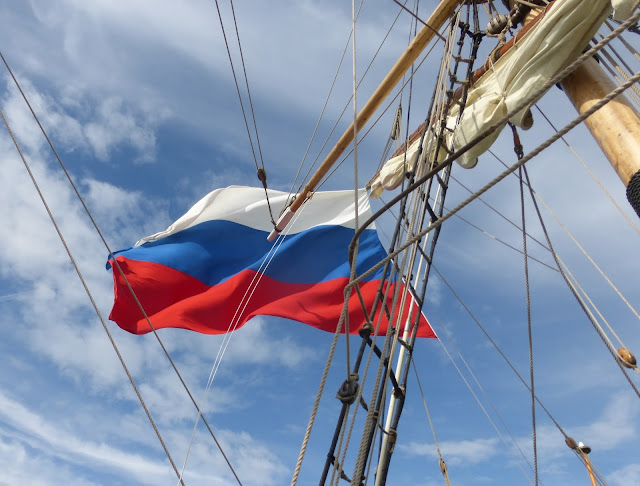 So it was really like stepping back in time and next time I read a Patrick O'Brian or Alexander Kent novel I will have a much better idea of what the conditions were like on these early frigates.
Posted by legatus hedlius at 16:22

Why start yet another blog and not only a new army but a whole new period? Simply, this is a response to a great set of new figures which I instantly took to. Partly, I suspect, it goes back to a few years ago when I painted up some of the Revell Thirty Years War Swedes and just found that the yellow and blue uniforms were rather striking (I have always been a visual person!).

A couple of Musketeer Miniatures advertisements in the Wargaming magazines and that was it!

Now there is the added impetus of some of the others at Guildford showing an interest (there is already a big Marlburian contingent).

Finally, of course, I am one sixteenth Swedish (from Malmo).

On this site I intend to record the building of my units and any other interesting links and information that I discover. General GNW and other Links